About the same time, I heard a visiting lecturer, an anthropologist, use a term I was unfamiliar with: multinational corporations. She used it as the answer to: What would nonhuman aliens regard as Earth’s dominant life form?

If it seems like a tweet that's too easy to dunk on, it's probably that way by design.

Feeling Tired and Alone? You Might Be Suffering From Being Alive

Being an author means some readers cry when they meet you, but the people in your every day life assume you're not very successful.

This is a very funny sentence, and near maximum levels of Marvel. pic.twitter.com/mijDjxFoDc

I still think about the kid who said that Fight Club is a bizarre movie to understand here in 2020 because it's about a bunch of white cishet men who are mad that they have jobs and can afford to shop at IKEA.

I want to make sure I have this right.

Imagine what a man like John Lewis could’ve done for us all if he hadn’t needed to use his whole life to fight for something as simple as fairness.

We are never going to get “back to normal.” Recovery from the immediate disaster will take long enough that the ordinary pressures of history will transform the world into something new. Longing for the world of January 2020 is as pointless as wanting to bring back the 1950s.

I love seeing quotes about “the media” hating someone and being united in some effort to get him or her. We don’t even like each other.

There, then, he sat, the sign and symbol of a man without faith, hopelessly holding up hope in the midst of despair.

Did the surgeon general just tell us that the US can’t mandate a nationwide mask order because police are incapable of enforcing it without killing black people?

That is a stunning admission from our national leadership. Absolutely stunning. https://t.co/gPhq2YAW5x

As ring stories go, this one has an eye-popping last act: https://t.co/2X4tdXjTSe

"Intelligence is not the measure of how much we know how to do, but of how we behave when we don't know what to do. It has to do with our ability to think up important questions and then find ways to get useful answers." --John Holt

A comprehensive follow-up study of Italian Covid patients shows that after 60 days only 12% are fully recovered.

This reinforces what we already know - this is not about 'not dying', it's much more.https://t.co/EibYxDRuJ6

What Star Trek Can Teach Us About Police Reform 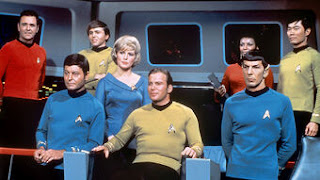 There is a groundswell of public outcry to "defund the police," which is (to my perception) a provocatively worded demand to reform the police and divert many police duties to other, or even new, public safety agencies. Break up the police into several, smaller specialty services, rather than expecting any one police officer to be good at everything asked of a modern police department.
You know, like Star Trek.
As much as every Star Trek character is a polymath soldier/scientist/diplomat/engineer, Star Trek actually breaks up its borderline superheroes into specialty divisions, each wearing different technicolor uniforms to handily tell them apart. Scientists, engineers, soldiers, and commanders all specialize in their areas of expertise, so no one officer is asked to be all things to all peoples on all planets. Even Captain Kirk usually left the engineering to Scotty, and science-genius Spock most often left the medical work to Dr. McCoy. The same logic should apply to a city's public safety apparatus, which includes the police.
Specialization leads to effectiveness and efficiency. So, why do we expect the same police officer to be as good at managing traffic violations, domestic disturbances, bank robberies, and public drunkards? Those incidents require vastly different skills, resources and tools. They should be handled by different professionals.
This is not a new idea. Until the late 1960s, police departments also handled the duties that emergency medical services tackle today. And they weren't great at it. Pittsburgh's Freedom House Ambulance Service (motivated by the same issues of police racial discrimination and apathy as the current "Defund the Police" movement) pioneered the practice of trained emergency paramedic response, which became a model that the Lyndon Johnson administration helped spread nationwide.
Divesting emergency medical services from police departments has saved countless lives while also helping narrow the focus of modern police departments. Specialization was a net good. So let's expand on that.
So, how do we break up the modern police into their own Trek-style technicolor specialty divisions?
Let's look at what "away missions" that the police commonly undertake. The best indicators are police calls for service (CFS), which are largely 911 calls but can also include flagging down patrol officers in person. These are the "distress signals" the public sends out to request police "beam down" and offer aid. National data on aggregate calls for service is a little hard to come by, but this 2009 analysis of the Albuquerque Police Department CFS data gives a nice local breakdown.
From January of 2008 to April of 2009, this was the general distribution of APD calls for service:
(NOTES: Unknown/Other, I believe, refers to calls where general police assistance is requested but the caller won't specify exactly what the police are needed for. Robbery would fall under Violence. Burglary would fall under Property Crime.)
A few items stand out, but first, let's recall how valuable it was to divest police of EMS duties. Medical emergencies are the cause of less than 1% of 911 calls, but they clearly warrant a non-police specialty agency to handle. Certainly some of these other, more common calls warrant specialist responses, too.
Similar findings were generated by this 2013 study of Prince George's County, MD.

Right off the top, we can see that traffic enforcement takes up an inordinate amount of police calls for service. It seems rather ludicrous to send an armed security officer to write up fender-benders, hand out speeding tickets, rescue stranded motorists, or cite cars with broken tail lights or expired tags. An unarmed traffic safety agency, separate from the police, seems like an obvious innovation, just based on this data.
But what about all the ancillary crime "discovered" during routine traffic stops -- the smell of marijuana, weapons in plain sight, suspicious activity on the part of a driver? Well, a traffic safety officer can just as easily report these discoveries to police. But many of these "discoveries" were made during pretextual stops; cases where police already suspected the driver or passengers of wrongdoing and used a traffic stop as an excuse to search the person and property of the vehicle occupants.
These pretextual stops have been shown to erode trust in police and often lead to rampant abuses of power (and, too often, the paranoid execution of suspects in their own cars, as in the case of Philando Castile). Separating police from traffic enforcement will also separate them from the temptation to abuse pretextual stops.
Also, we could probably get a lot more people to sign up as traffic safety officers knowing they won't be asked to do any armed response work, and a lot more people will be eager to flag down a traffic safety officer for help with a flat tire if there's no chance a misunderstanding with that officer will lead to the motorist getting shot.
Beyond traffic enforcement, where else could specialization and divestment benefit the public and the police? Disturbance/Nuisances, Suspicious Persons, Public Disorder and Domestic Disturbances all represent a significant percentage of calls for service. Most often, someone loitering, being loud, arguing openly, or appearing inebriated (or simply being non-white in a predominantly white area) is not cause for sending in an armed officer. A social worker or mediator would be far more appropriate in many cases.
That said, domestic disturbances are often violent and unpredictable, as are public drunks and mentally ill vagrants. Sometimes a person skulking around is actually a public danger. While unarmed social workers may do more good -- and absolutely will shoot fewer suspects -- it is not entirely wise to send in completely defenseless mediators to every non-violent report of suspicious or concerning activity.
Again, we can learn from Star Trek.
When Starfleet sends some combination of experts on any mission, the diplomats, scientists, doctors, and counselors outrank (and often outnumber) the security officers -- but the redshirts nonetheless come along for the ride. Violence is the last resort, not the first, and persons trained and specialized in the use of force answer to people who lead with compassion, curiosity, and science. That's a great idea on it's face; doubly so for police departments clearly struggling with their use of force.
So, we create a social intervention agency and send them in when the public nuisance has no obvious risk of violence. When there is a reasonable possibility of violence, we send a conventional police officer in to assist the mediator, but the mediator is in command. The redshirts report to Captain Kirk, not the other way around.
So, here's how I would break out a modern public safety agency, using Star Trek as a guide to reform and divest from the police.
Each division is identifiable by their uniform colors, so the public knows who and what they are dealing with at all times. It is also made abundantly clear that only Security blue-shirts are armed and that, if an active violent crime is not in progress, whichever of the other divisions is present on a Public Safety call is in charge.
All six divisions are headed by a Chief -- a Security Chief, a Fire Chief, a Chief of Emergency Medical Services, a Traffic Patrol Chief, a Chief of Emergency Social Services, a Chief Investigator -- that report to a Commissioner of Public Safety.
That Commissioner should report to a civilian Commission, which is an independent oversight board that can investigate the conduct of any officer of any division. Accountability is as important as specialization. No good Starfleet captain was ever afraid to answer for the conduct of his or her crew.
Tricorders -- which is to say, body cameras and dash cams -- will be needed to log every mission. That's for the safety of both the public and the officers. Funding will need to be rethought. Staffing will need to be reallocated. The word "police" may no longer be a common phrase, but blue-clad armed peace officers will still be a necessary component of these new public safety agencies. They just won't be the only option, and they won't be the first option in most cases, either.
As Spock would say, it's only logical.
Posted by Jay Garmon 1 comment:

No amount of clapping or cheering or calling healthcare workers heroes meant a damn thing if you undo all our work with your shitty, irresponsible behavior now.

I think the @Indians’ new name should be the Cleveland Commodores.

Reason: Commodore Oliver Hazard Perry led the US Navy to win the Battle of Lake Erie in the War of 1812 and his battle flag is this famous one.

Please and thank you. pic.twitter.com/kzRyXyTzN0

America stopped being able to differentiate between "Freedom" and "you're not the boss of me" and that's why we can't get any sense of national unity on something as unifying as fighting a pandemic.