TechTalk Trivia: What 2 types of propulsion was Mariner 10 was the first spacecraft to use?

Image via WikipediaYet more damning evidence of my radio ineptitude courtesy of TechTalk on WRLR Chicago. This time around, I divulge what two types of spacecraft propulsion that Mariner 10 was the first spacecraft in history to use. If that sounds like your cup of tea, I promise the info survives my bludgeoning attempts at being entertaining.

More importantly, Mike Kastler explains how to use the Internet to up the efficiency and honesty of your charitable donations. Listen for that service, if nothing else. Skip over my trivia nonsense, if necessary.

TechTalk Trivia: What famous rock band wrote the theme to the original “Hitchhiker’s Guide to the Galaxy” radio plays?

Image via WikipediaMy streak of radio appearances which have yet to draw FCC fines somehow continues with yet another appearance on TechTalk in Chicago. This week, I reveal which Hall of Fame rock band lent their music to be the theme of the original “Hitchhiker’s Guide to the Galaxy” radio plays. I also pimp Backupify rather profusely, but that wasn't my idea.

You'll probably get more out of the iPad 2 vs. Blackberry Playbook discussion, since I wasn't a part of it. Give it a listen.

Why regulation should be about transparency, not outcomes

Image via WikipediaTake cover, there be ranting ahead.

Make regulations about transparency, not outcome.

Image by Sister72 via FlickrAgainst all odds, I was once again allowed on broadcast radio -- and the podcast proof has finally surfaced from TechTalk on WRLR FM in Chicago. This time, I reveal what world-famous web site activated its domain name on Valentine’s Day 2005. DOn't worry, the mental damage is minimal and the rest of the broadcast redeems my babblings. Give it a listen.

Are comic books a legitimate media for science fiction?

Image via WikipediaThe title denotes the topic of the latest SF Signal podcast to be corrupted by my audible contributions.

The likes of myself, Jeff Patterson, Jessica Strider, Derek Johnson and Patrick Hester combine into a virtual voice-only Voltron and wage war on the notion that there ain't no stinkin' sci-fi in your four-color funnybooks. Give a listen if that's of interest.

As always my litany of past SF Signal podcast misdeeds is available here. 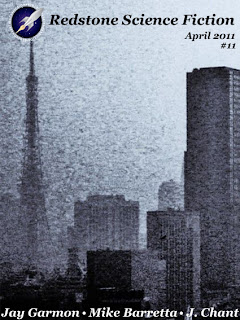 On my bio page, when discussing my futile efforts to launch a career as a science fiction author, I made the following threat:


If [such publication] ever happens, expect the first announcement to appear on JayGarmon.Net along with a copious overuse of exclamation points...

I'm nothing if not a man of my word.

As to specifics, the story is titled "Perfection" as was purchased by the fine folks over at Redstone Science Fiction. They actually snagged the story a few months ago but I held off noting it here until the link went live in their April issue. (The irony of my first fiction sale meeting the world on April Fool's Day is not lost on me.)

As to the story itself, I'd like to think I wear my Charles Stross influences rather proudly. This is also a considerably shorter piece than I usually write, which no doubt contributed greatly to its publication. Nonetheless, I commend its content unto you, and welcome feedback -- positive or otherwise -- in the comment spaces of this post. I thank you in advance.