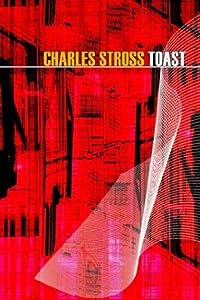 My time is grandly overcommitted these days, so it is with extraordinary stupidity that I steal a New Year's resolution from my colleague and friend Michelle and foreswear to read 25 books in 2009. It's pretty crazy, since I'll be working three jobs this year (at least) and I'm also vowing to get at least one short story published in one of the Big Three sci-fi magazines (to say nothing of plans to lose 20 pounds, attend the Final Four, get back into shape, buy a new house, plus all the commitments native to being a decent friend, husband, father, and professional). But those are insanities for later discussion, as we've got books to showcase, beginning with...

Jay's Wonderous Christmas Book Haul:
This, of course, ignores the stack of unreads dating back to last year (or earlier) that I intend to wade through:
And, naturally, I can't start on any of those yet, because my sci-fi book club is reading Vellum by Hal Duncan in January and, since I helped pitch the book to the group, it only seems fair to read it. I had to hurry up and finish Saturn's Children, also by Stross, to clear room for it, which means I won't get to count Saturn's Children towards my '09 total. Also, since Northlanders and Ex Machina are graphic novels that took me about 60-90 minutes to read, I'm not counting them, either. Plus, I've read them already because they are awesome.

I expect paper cuts, sleepless nights, and abject self-loathing by mid-September when I'm hopelessly behind on most of my goals. But until then, bibliophilia awaits.

Why I'm not a professional novelist

There are three reasons, actually. The first is my glaring lack of talent, though I can name probably fifty professional authors that haven't let that stop them.

The second is the appalling rate of pay. While I dream of making John Scalzi money, I'd almost certainly make something below Justine Larbalestier money--and that's no knock on Mrs. L. She is teh awesome, but clearly under-appreciated and underfunded. As are most novelists. That's why most writers have day jobs.

But the main reason Im not a professional novelist is that, to do what Charles Stross does, I'd have to average an output of 1000 words per day. And that's finished work, mind you, discounting edits, rewrites, and those days when you merely manage to vomit something onto the page which deserves nothing less that complete and total abandonment, if not outright exorcism from the memory of the universe. Oh, and if one were to get sick or take a vacation, those thousand finished words would needs be made up on another day, skewing the workday average.

I'm not sure I speak 1000 words per day--certainly not 1000 usefully repeatable words--let alone could average such an output in written form. This is why I do about 6 billion other things besides write: partly because I'm better at them than writing; partly because they pay more. But mostly because it's an output I can sustain.

On naming your company...

So, whilst trying to come up with a name for a company I'm forming, my impending partners and I momentarily considered billing ourselves as The Justice League of Social Media. We thought better of it, of course, not because it was too nerdy--the nerdy was a plus in our book--but because it was a serious case of hyperbole.

I mean, the Justice League of Social Media would have to include, like, Clay Shirky and Chris Brogan. The league is the best of the best in the DC Comics universe, boasting Superman, Batman and Wonder Woman on the roster. We're way further down the super-hero food chain. We're, like, the Doom Patrol of Social Media. (Dibs on Robotman!)

For what it's worth, we settled on Third Space Media as our name. This superkeen Wikipedia article explains why.

Details to follow, but for now, suffice it to say interesting times are ahead.
Posted by Jay Garmon No comments:

Email ThisBlogThis!Share to TwitterShare to FacebookShare to Pinterest
Labels: career

The Written Weird has been quiet for a couple of weeks, mostly because the startup that comprises my day job is shutting down. Not to worry, contingency plans are afoot, and I expect I'll be in great shape 90 days from now. During the lean times, I might even have time to blog more. (Whoa! Crazy talk!)

In the interim, I leave you with this ingeniously amalgamated inspirational message from Overthinking It, which hacks together over 40 famous movie speeches into two minutes of pure awesome. It well bespeaks where my head is at.