The term is named after MIT scholar Alan Wexelblat who sketched out the concept, though he called it a Viridian Disaster in reference to Bruce Sterling's Viridian Design Movement. Unfortunately, Wexelblat did too good a job of evangelizing the concept because it became synonymous with his name.

Moreover, Wexelblat disasters have become a key point of criticism of large-scale technology, particularly because second-order effects of technical achievements are not taken into consideration. The Washington Post has a nice list of Wexelblat disasters, and it's great fodder for story ideas if nothing else.

I bring it up because: Four years ago this week, the levees broke in New Orleans as a result of Hurricane Katrina. This tragedy is now held up as the quintessential Wexelblat disaster, as the flooding of the lower wards of New Orleans was a direct result of failing to consider the consequences of levee engineering and wetland removal. The fictive theorization of possible Wexelblat disasters is not just the basis of new and interesting sci-fi disaster novels but a key academic pursuit for the coming century. Plus, it's fun to say.

A Web site that needs to exist 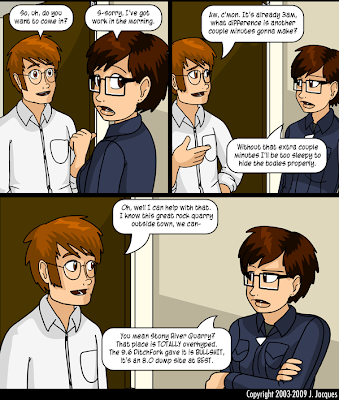 Once again, reality fails to live up to Questionable Content. I would totally add DitchFork.com's RSS feed to Google Reader.

I want a newspaper that DOESN'T include AP content For those that haven't heard, the Associated Press (AP) is trying to add digital rights management (DRM) to its syndicated news content because its tired of the bloggerati and spam sites making money off its hard earned journalistic products. Setting aside the fact that this absolutely, positively won't work, it also misses a key point about the AP that I think has been missed in the coverage of this brewing fiasco: I don't want AP content from my newspaper or news Web sites.

AP content is a product of a bygone era, when I had to consume my print news from a single (or, at least very few) source: The local paper. The AP's coverage of foreign and national events saved my favorite newsrag the time and expense of maintaining a bureau or freelancer contact in every major city on Earth. It also had the side effect of every major paper carrying essentially the same story, though few people noticed it because most of us read our local paper almost exclusively.

I don't have a single text news source any more. My RSS reader is crowded with dozens of news mastheads, and those sources cull from dozens or even hundreds of other sources. The problem: Those news "sources" are riddled with duplicate content because most of them run the same freakin' AP stories!

To show you how pointless the AP business model has become in the modern era, choose a single game in a non-tournament sporting event. Say, yesterday's Red Sox/Blue Jays game. Check the story on CNN, ESPN, Fox Sports, CBS Sports, and Sporting News. It's precisely the same story, dressed up in each respective site's drag (though Fox Sports gets points for pulling in local paper content ahead or alongside AP stuff). If I subscribed to each site's baseball feed, I'd get the same story almost word-for-word five times.

What I want is a newsfeed that filters out all this duplicate AP stuff. If I read the AP story once, I'm good. What I want are different perspectives (which blogs give, though usually absent the on-the-scene authority of a beat reporter) on the same story. As a devoted Louisville Cardinal fan, I want not only the AP and local paper's perspective on UofL games, but the opposing team's paper's perspective on the game, as well as that of national columnists and analysts.

I've tried hacking together just such a filter using Yahoo pipes, one that goes through every local Big East paper's Louisville content and one that hits the major sports Web sites' college basketball pages, trying to block out the AP content which I know will be endlessly duplicated. The results are kludgy, mostly because there's no simple, universal way of noting AP content. (I'm left with keyword filters, so other teams from Louisville or other schools with Cardinal mascots creep in.) Thankfully, once the AP's DRM kicks in, I'll have a nice, simple way to screen out all the endlessly duplicated AP clone-stories from my feeds and get the actual analysis and opinion about the sports -- and other subjects -- I truly care about.

Thanks, AP, for conveniently engineering yourself out of my consciousness. I can't wait until you've built your own future demise.

Image via WikipediaZombie apocalypse (n.) - An end-of-civilization scenario wrought by an outbreak of zombies that rapidly converts or consumes the vast majority of the human population, thereby leading to global societal collapse. Basically, any story where zombies take over the world.

While apocalyptic and post-apocalyptic fiction have been established subgenres of both speculative and conventional literature for decades -- the Roland Emmerich big-screen cheesefest 2012 and Cormac McCarthy's critically acclaimed book-cum-movie The Road being but two of the most recent examples -- the zombie apocalypse is a genre, a setting, and pop cultural movement unto itself, particularly on film. Put another way, you can be a fan of zombie fiction and/or zombie flicks without being a fan of any other genre or subgenre of speculative fiction.
We owe much of this standalone zombie popularity to George Romero and his schlocky but commentary-ridden Living Dead movie series, which has enticed devoted fans for decades. Zombie apocalypse fandom is growing steadily more mainstream, with no better example of the phenomenon than the near-ubiquity of zombie walks -- wherein dozens to hundreds of zombie cosplayers shamble through a public area en masse -- across the United States each year.

I bring it up because: First and foremost, Robert Kirkman's seminal zombie apocalypse comic book series The Walking Dead has been recently placed into production as a television series by AMC, with fans clamoring for a Mad Men-quality serious treatment of the highly thoughtful and successful zombie franchise.
Secondly, because some oddball Canadian mathematicians have modeled the zombie apocalypse and calculated exactly how small the time-window for containing such an outbreak would really be. (Verdict: We're hosed.)
Thirdly, because zombie fiction has begun to consume the classics of literature, as is the case with Pride and Prejudice and Zombies, a retelling of the Jane Austen novel with an account of a Victorian zombie outbreak integrated with the original text. (It can't be any more painful than Clueless.)
Now, if only we could foretell the likelihood of the World War Z movie ever getting made, let alone made well. Frankly, we're more likely to confront an actual zombie apocalypse first, in which case we'll each need a copy of The Zombie Survival Guide (thankfully, also by the author of WWZ).

Nerd Word of the Week: Crit

Crit (v.) - A shortened vernacular form of critical hit, critical attack, or critical success; to inflict a particularly devastating or unusually effective attack on an opponent or object, usually within the context of a tabletop roleplaying (RPG) or video game. Used as a verb, as in "I totally critted that orc," or a noun, as in "Was that a crit or just normal damage?" Like all such game-centered terms, it creeps into common usage for geeks, sometimes used to describe any particularly successful action. The accepted antonym is a critical failure, also known as a crit-fail, wherein the worst possible outcome of a situation or attempted action comes to pass. Geeks often use crit-fail to describe their attempts at socialization or romance which, given that we use terms like crit-fail in basic conversation, is a pretty good indication of why we crit-fail socialization and romance.
In a gaming context, crits and crit-fails are most often associated with rolls of a twenty-sided die, otherwise known as a D20. In a significant number of tabeltop roleplaying game systems, rolling a 20 on a D20 is an automatic critical success or critical hit, and a roll of one is an automatic crit-fail. Thus, the ubiquity of geek t-shirts that invoke D20s and their related terms (see here, here, here and here).
I bring it up because: Today is the first day of Gen Con 2009, one of the two largest tabletop gaming conventions in the United States, the other being the Origins Convention. For the next four days, 25,000 hardcore gamers will descend on Indianapolis and large sectors of the geek blogosphere will be overcome with news of the latest Dungeons & Dragons supplements, miniature wargaming models, and collectible card game (CCG) franchises. Pretty much any and every major non-electronic geek game will be on display, so brace yourself for an online tidal wave of nomenclature only slightly less obtuse than that employed by Internet daytraders. And if you get cornered by one of the us nerdspeakers, just tell us we crit-failed the explanation and we'll downshift to English. Maybe.

Nerd Word of the Week: Mundanes

Mundane (n.) - A slang term from science fiction fandom which describes all non-fans. In many instances the term is used as a perjorative. Mundanes is also a term adopted for similar usage by other related subcultures, including goths, who use it to describe non-goths, and the Society for Creative Anachronists, who use it describe anyone who isn't a participating member of the SCA.
The term mundane, sometimes shortened as mun or mundie, is also used within works of science fiction and fantasy. For example, telepaths in the Babylon 5 universe refer to all non-telepaths as mundanes and in the Fables graphic novel series, all characters that do not orginate from fairy tales or folklore are referred to as mundies.
Moreover, there is a subgenre of science fiction known as mundane sci-fi, which adheres to highly realistic and plausible settings and plot devices within its stories, eschewing the more fantastical and extraordinary tropes more often associated with mainstream science fiction, particularly space opera.
Thus, usage of mundane within fandom is somewhat recursive, referring at various times to characters, stories, non-fans, or as a derogatory term for fans that are perceived as inferior or lacking sufficient devotion to fandom in general or an individual franchise in particular. Mundane as a fandom descriptor has fallen somewhat out of usage in recent years in favor of the Harry Potter-inspired (and thus currently more widely recognized) term muggle.
I bring it up because: Today is the first day of the 2009 World Science Fiction Convention, whence come the Hugo Awards, and if any place is likely to illustrate the varied usage of the word mundanes (to say nothing of the obvious dichotomy between fandom and the mundanes) it's WorldCon. Moreover, today is the 75th birthday of author Piers Anthony, whose obscenely long Xanth series of fantasy novels includes one of the most popular invocations of the term mundane, which in his context describes any normal human not born of the fictional world of Xanth. We commend either occasion as an excuse to reach out to any of the Mundanes in your life and share a little bit of the joy of fandom with them. Or just point and call them a mundie. Whatever leads to joy, really.