Nerd Word of the Week: Jailbreaking Image via Wikipedia
Jailbreaking (n.) - Circumventing the Digital Rights Management (DRM) on a device to use it in a manner not intended or desired by the manufacturer. The term was originally applied to the Apple iPhone and then extended to any device running the iOS, though jailbreaking or jailbroken can now be applied to most any smartphone or consumer electronics device. (Jailbreaking an Android OS device is sometimes called rooting, as in attaining root access privileges on the phone, though only "we were never in Steve Jobs's jail" Android OS enthusiasts tend to insist on the distinction.) Failed jailbreaks can result in your device being bricked, which is to say rendered useless.

I bring it up because: A federal judge ruled this week that jailbreaking is legal. Specifically, circumventing DRM is legal, so long as that circumvention doesn't then lead to actual illegal activity. Thus, you can break the DRM on your DVDs in order to make backup copies of your movies or convert them to run on incompatible devices you legally own. You can't break the DRM and then use your newfound powers to produce and sell discount copies of your film collection. This ruling now makes it legal to jailbreak devices so long as you don't then use those devices for illegal purposes. Apple, as you might expect, wasn't happy about the ruling and reminds you that jailbreaking still voids your iPhone warranty. Techcrunch thus asks if we're about to see jailbreaking go mainstream, but then answers its own question -- by way of a Harvard Law professor -- that while jailbreaking is now legal, providing jailbreaking software may not be. There's been no firm ruling on what happens to jailbreak developers, but you can bet that's who Apple and friends go after next.

I am once again snowed under with work, but since today is Bugs Bunny's 70th birthday -- the rascally rabbit debuted in the cartoon short A Wild Hare on July 27, 1940 -- I figured I'd rely on a Bugs-centric Geek Trivia column to fill my usual Truly Trivial column space.


As difficult as it may be for you Merrie Melodies fanatics to accept, Bugs Bunny is not the most artistically accomplished cartoon character in the Warner Brothers stable of animated icons. Using the Academy Award for Best Animated Short as a measure, Bugs is woefully underrepresented when it comes to Oscars on the mantle.

... Bugs Bunny [was] the fifth and final Warner Brothers cartoon character to win an Academy Award, and he’s tied for third amongst his fellow Merrie Melodieans in number of statuettes, as Sylvester has three, Tweety has two, and Bugs, Speedy, and Pepe are all tied at one apiece.

If that seems a grave artistic injustice, Bugs Bunny fans, take heart. The infamous rabbit has one distinction that no other cartoon character can match: an official rank as a member of the U.S. armed services.

Image via Wikipedia
High ground maneuver (n.) - A public relations tactic wherein the guilty party admits fault, but suggests that this mistake was due in part to a larger, universally acknowledged problem. The result is to frame the public debate around the larger issue, rather than the guilty party's specific gaffe. The guilty party stakes out the "moral high ground" of trying and failing to solve a broad, systemic problem. The term was popularized by Dilbert creator Scott Adams.

I bring it up because: Adams outed his high ground maneuver phrase just this week in his analysis of the Apple iPhone 4 "antennagate" press conference. Steve Jobs basically staked out the high ground of trying to fight dropped calls -- a problem every smartphone has -- and admitted that Apple failed to topple this unbeatable enemy. While Apple isn't getting a total free pass, the debate has moved on to how every smartphone deals with signal drops, rather than exclusively about how Apple's iPhone 4 exhibits the problem. That, my friend, is a classic high ground maneuver.

What did a 404 error signify in the Apollo 11 computer guidance system?

Image via Wikipedia
Today is the 41st anniversary of the Apollo 11 moon landing, and I'm too busy celebrating to write an original Truly Trivial piece. Thus, I leave you with one of my old Geek Trivia columns regarding some historically significant computer errors experienced during Apollo 11:


When Apollo 11 set forth for the moon in 1969, it carried with it what were then arguably the two most advanced computers ever built. The Apollo Guidance Computer — two of which went on every manned moon mission — was the first computer to use integrated circuitry and was thus the first modern embedded computer system ever put to use. ...

That isn’t to say the Apollo Guidance Computer — advanced as it was for its era — was error free. The AGC that ran the Apollo 11 lunar module’s Primary Navigation, Guidance, and Control System (PNGCS, pronounced pings) malfunctioned during the first lunar descent. Fortunately, the error codes 1201 and 1202 didn’t faze Buzz Aldrin and Neil Armstrong when they popped up, informing the astronauts of a critical buffer overflow. ...

If the Apollo Guidance Computer had thrown a 404 error, it might have been a different story.

WHAT DID A 404 ERROR CODE SIGNIFY IN THE APOLLO GUIDANCE COMPUTER SOFTWARE SYSTEM?

Nerd Word of the Week: Bacn Image by funkandjazz via Flickr
Bacn (n.) - A type of automated e-mail that is less onerous than spam but less wanted than actual, human-generated communications. The classic contemporary examples are Facebook e-mail alerts, which are spam in the sense that they are automated, but desired in that they alert you to Facebook-native content you want to see. It's better than spam, it's bacn.

I bring it up because: Google hates bacn, and it's suggested that's why Google can't build a successful social network. Google is all about the practical, useful, and minimal, while Facebook is a bacn-coated timesink. Google can't beat Facebook because Google is so spam-averse it won't even touch bacn.

UPDATE: Clearly I was wrong, as Google+ is a total bacn-factory. Image by ericskiff via Flickr
On July 14, 1969, The United States Federal reserve removed from circulation any denomination of US currency larger than the $100 bill. While the $500, $1,000, $5,000, $10,000 and $100,000 bills are still valid currency, they are rarely spent, as any such bill that makes it into the Federal Reserve system will be retired -- and these rare bills have collectible value well above their denomination.

Still, some idiots just can't resist counterfeiting large and/or fictional denominations of US money, even though they're almost invariably caught trying to pass these bills off. What's even more shocking are the imbeciles that try to pass these fake notes off at Las Vegas casinos -- perhaps the single most counterfeit-aware group of businesses on the planet.

Thus it's apropos that Vegas gave the most trouble to a legendary Silicon Valley businessman who creates unusual -- but perfectly legal -- "custom" versions of US currency.

Nerd Word of the Week: Pseudonymity Image via Wikipedia
Pseudonymity (n.) - The practice of using a consistent pseudonym to develop an online persona that is not openly connected to your real name or offline identity. A portmanteau of pseudonym and anonymity. Pseudonymity is different from anonymity in that postings made anonymously online can never be tracked to any single person. Pseudonymous postings made with a consistent, recurring pseudonym held by a single poster can over time accrue their own following, reputation, and online social capital.

I bring it up because: Blizzard just launched RealID over at Battlenet, which ends pseudonymity for anyone participating in the ragingly popular World of Warcraft forums there. This has sparked a privacy debate, as RealID exposes your real name on all your Battlenet postings, and some folks don't want the world knowing how much time they spend in WoW forums, much less what gets said there. Everyone from CTRL+ALT+DEL and Penny Arcade to the Geek Feminism Blog and The Washington Post have weighed in. Many are claiming this is a loss of anonymity, but in truth Blizzard is eliminating pseudonymity, as your posts we're always tied to a consistent username. The move was made to ostensibly cut down on trolling -- in line with Gabriel's Greater Internet Dickwad Theory -- but Seriously Not Okay refutes that logic thusly:


It is a common misconception that trolling is caused by anonymity. It is not. It is caused by people being assholes.

Some people simply enjoy being griefers, and don't care if they do it under a real name or a fake one. Eliminating pseudonymity or anonymity doesn't eliminate the asshole factor. That's worth remembering as more sites make sweeping changes like as Blizzard just did.

When sliced bread was first sold, it was marketed as "the greatest thing since..." what?

We've all heard the phrase "the greatest thing since sliced bread." Machine-sliced bread was first produced on a wide commercial scale on June 7, 1928 by the Chillicothe Baking Company in Missouri. The CBC marketed their new Kleen Maid Sliced Bread using a variation on the now-familiar axiom, touting sliced bread as the best thing since another bread-related innovation.

When sliced bread was first sold, it was marketed as "the greatest thing since..." what? 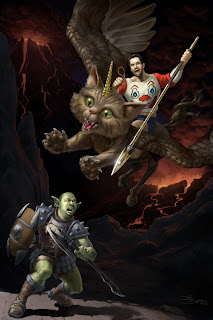 Unicorn Pegasus Kitten (n.) - A mythical beast modeled after the chimera that combines the rear legs and wings of a pegasus, the forelegs and head of a giant kitten and the horn of a unicorn. Seriously.

The unicorn pegasus kitten, sometimes referred to as the UPK, was created as a parody of conflated internet memes by artist Jeff Zugale at the request of author-blogger John Scalzi (depicted as an orc in the original UPK painting) and actor-author-blogger Wil Wheaton (depicted as a clown-sweatered orc-hunter in the original UPK painting) as part of a fundraising project to benefit the Lupus Alliance of America. The unicorn pegasus kitten instantly became a meme unto itself, with sci-fi songwriter John Anealio already providing its immortal ballad.

I bring it up because: As of today, the co-inspirator of the unicorn pegasus kitten is President of the Science Fiction and Fantasy Writers of America. Already his campaign platform has given way to a reign of terror. And unlike in the painting, there is no clown-sweatered spear-toting meme-rider to save us. Hooray!