What symbolic item of cargo miraculously survived the Challenger disaster -- and is still in service today? Image via WikipediaFive years ago, on the 20th anniversary of the Challenger disaster, I wrote this Geek Trivia column. Half a decade later, I modestly pass this bit of history on to my readers again.


What notable item of nonscientific cargo survived the Challenger disaster, going on to have its own unique, symbolic career?

An American flag on loan from Boy Scout Troop 514 from Monument, CO was onboard the Challenger when it broke apart, and salvage efforts recovered it from the Atlantic Ocean completely intact inside its sealed plastic container.

Now known as the Challenger Flag, it has enjoyed some storied exploits since its discovery during the Challenger wreckage recovery efforts. ... Though explosion all but destroyed the flag's commemorative case and a group of silver medallions along with the Challenger, the flag itself survived to fly at many notable events and locations. ...

NASA returned the flag to Troop 514 in late 1986, but it did not remain with them long. In early 1987, Chief Justice of the U.S. Supreme Court Warren Burger designated the Challenger Flag as the official flag of the U.S. Constitution's Bicentennial celebrations. On Sept. 17, 1987, the Challenger Flag served as a featured part of the Constitutional Parade in Philadelphia, and the following day it flew once again above the U.S. Capitol.

The Challenger Flag then went into semi-retirement for the next 15 years, serving only as an honored artifact in Colorado Boy Scout Eagle Court ceremonies. Then, in 2002, the troop loaned the flag to the Church of Jesus Christ of Latter Day Saints for display in Salt Lake City while the city hosted the Winter Olympic Games.

Today, the Challenger Flag again resides in the possession of Troop 514, awaiting its next call to duty.

What consumer product *besides* building blocks does Lego manufacture more of than any other company in the world?

Image via WikipediaA mere 53 years ago today -- Jan. 28, 1958 -- the Danish toy company Lego patented their design for interlocking plastic building blocks. In the intervening decades, the Lego brick has become arguably the most popular brand of building block in history, as the company has produced some 400 billion Lego blocks, or roughly 62 bricks for every man, woman and child living today.

As a byproduct of this massive success, Lego has also become the world's most prolific manufacturer of another consumer product -- one that almost no one recognizes despite the staggering volume of the product put out by Lego every year.

WHAT CONSUMER PRODUCT BESIDES BUILDING BLOCKS DOES LEGO MANUFACTURE MORE OF THAN ANY OTHER COMPANY IN THE WORLD?

Image via WikipediaTo my mind, there are three basic causes of our highly polarized perception of contemporary American politics, and at least two can be fixed with relative ease. (Be forewarned, I'm about to engage in an exercise of armchair political analysis. Here there be anecdotes; data junkies need look elsewhere.)

Beyond the general tribal nature of the human condition to pick a side and stick with it regardless of the facts -- I point you at sports fandom for base evidence of the trend -- American politics seem especially rancorous, divisive and partisan these days because of...

Image via WikipediaForty-five years ago today, the US Air Force suffered a real-life Broken Arrow when a hydrogen bomb was lost in a mid-air collision over rural Spain. The so-called Palomares Incident occurred on Jan. 17, 1966 when a KC-135 airborne refueling tanker collided with a B-52G bomber that was carrying four Mk28 hydrogen bombs. The entire crew of the KC-135 was killed, three of the seven men aboard the B-52G died, and all four hydrogen bombs separated violently from the destroyed aircraft.

This is a classic Broken Arrow event, wherein US-owned nuclear weapons are lost in a fashion that does not lead directly to nuclear war. (The film Broken Arrow actually depicts an Empty Quiver incident, wherein a nuclear weapon is stolen by hostile forces. The thieves attempt to disguise the theft as a mere Broken Arrow. The result is a Nuc Flash, as the stolen nuke is detonated.)

Two of the Palomares hydrogen bombs detonated their conventional explosive components upon impact with the ground, spreading plutonium fallout over a 2-square-kilometer area of Spain. A third bomb landed intact in a riverbed. The fourth bomb was lost when its descent parachute miraculously deployed after the collision, allowing the weapon to drift into the Mediterranean Sea.

It took nearly three months for a massive naval expedition to locate what was a essentially a metal cylinder 22 inches wide by 170 inches long in the vast expanse of the Mediterranean. Fortunately, the US Navy had some serious math geeks around to help them increase their odds of tracking down the nuclear needle in the aquatic haystack.

What secret ingredient in Coca-Cola is illegal for every other US beverage-maker to import or use? Image via WikipediaJan. 15 is the 122nd anniversary of the Coca-Cola Company, which is a perfectly good excuse for recycling an old Geek Trivia column rather than writing a new Truly Trivial for this blog. Thus:


The Coca-Cola Company took one of greatest media shellackings in history when New Coke debuted on April 23, 1985. The American consumer considered Coca-Cola a cultural icon that was above revision, so Coca-Cola Classic was released on July 10, 1985 (less than three months after being discontinued)...

Problem is, the Coca-Cola Classic that was released after the New Coke fiasco wasn’t the same as the Coca-Cola released before New Coke. The “logic” behind New Coke was two-fold: First, to make the drink sweeter in order to compete with sweeter-tasting rival drink Pepsi; second, to switch all domestic Coca-Cola bottlers from cane sugar to the cheaper high-fructose corn syrup sweeteners. When Coca-Cola Classic came back on the market, it too was made with corn syrup rather than sugar.

And that was far from the only change to the Coke formula over the years. In 1935, the formula was tweaked to be certified kosher. Moreover, John Pemberton, inventor of Coca-Cola, actually sold several different versions of the formula to different buyers — and that was after he had converted it to a carbonated drink, rather than its original alcoholic cocawine formulation.

One ingredient unique to American Coca-Cola is still used — after a fashion — in the formulation. Coca-Cola can rightly claim this additive as a brand differentiator, as it has received special dispensation from the U.S. government to be the sole American corporation to employ this ingredient in a consumer beverage.

WHAT INGREDIENT HAS THE U.S. GOVERNMENT GIVEN COCA-COLA SOLE AND UNIQUE PERMISSION TO USE IN CONSUMER BEVERAGES?


The answer is right here. 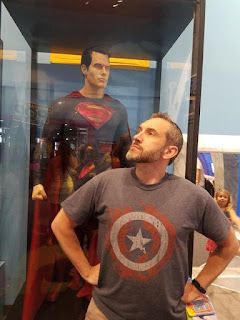 I, Jared Matthew "Jay" Garmon, am a professional geek. Specifically, I am a writer, husband & father, technologist, science fiction nerd, self-professed trivia expert and general Internet addict. Each of these aspects is entertained at different venues around the Web, as listed below.

Technologist: First and foremost, I am the CEO at Wellthon, an early-stage software startup developing a physical therapy app for persons with physical challenges and limitations.

I am also the "house writer" for the much of content produced by LinkSquares, an artificial intelligence startup out of Boston. That covers the main day-job tech resume.

In the past, I have advised on social media and emerging technologies for the Louisville Digital Association (for whom I have served as both president and vice president), Louisville EnterpriseCORP (for whom I was a founding member of their advisory "Justice League"), XLerateHealth (for whom I was a founding director), organized the Louisville Geek Dinner, and, as a guest instructor, helped inaugurate a Social Media marketing curriculum at the University of Louisville.
Writer:
This post is hosted on Jay Garmon [dot] Net (formerly known as The Written Weird), which is my personal blog where I prattle on about whatever topics interest me with very irregular frequency. You can also find herein copies of my science fiction short stories that I have "trunked," which is a euphemism for "given up on trying to publish." Yes, I have written other sci-fi shorts, exactly one of which has been sold for professional publication (though it did make the Tangent list...barely). I haven't written any fiction since my second child was born the better part of a decade ago, but I hope someday to return to the practice, which is why I started the Aldebaran Roundtable writers group.

As to the majority of the writing work for which I've been actively paid, look no further than my LinkedIn profile, and you'll see I've made my living in whole or in part by stringing together words for CNET, CBS Interactive, Scholastic Library Publishing, TechTarget, Backupify, Talla, LinkSquares, and Practical Assurance. But that's all non-fiction, so it doesn't count.

Husband & Father: I have the requisite Facebook page for the disseminating of pictures of my daughters, wife, friends, cats, travel, and Star Trek memes, but -- fair warning -- I also do the "talking about politics" thing there. Don't go if you're sensitive about your votes or policies.

Science Fiction Nerd: I have whittled a long career of semi-professional sci-fi fandom down to a single membership these days: running Hugo McNebula's Reading Circle for a few other book nerds. The membership of said circle has largely been collected from the pursuits below.

Until 2020, I was the Vice Chair of Marketing for ConGlomeration, Louisville's fan-run sci-fi and fantasy convention that shuttered due to COVID-19.

Many moons ago, I was the originator of and prime contributor to The Geekend, a nerd culture blog at TechRepublic, a Web community for IT professionals run by CBS Interactive (I think they call it the "After Hours" section, now). Predating the Geekend is Geek Trivia, a weekly (ahem) geek trivia column that I wrote for more than a decade. Both the Geekend and Geek Trivia have been cited by sources as diverse as author John Scalzi to the editors of Wikipedia.

I was an also an extremely irregular contributor to the Hugo-winning SF Signal blog -- usually their also Hugo-nominated podcasts -- where I performed a barely passable impression of an expert in sci-fi media and fandom.

Self-Professed Trivia Expert: As an adjunct to Geek Trivia, the kind and talented hosts of the now-defunct TechTalk radio show on WRLR 98.3 FM in Chicago had me on as a regular guest. There I snarked about movies, science fiction, technology, current events and ... eventually ... provided a geek trivia question each week.

I also occasionally wrote the Truly Trivial column here at JayGarmon.Net, wherein I threw a few hundred words at an obscure factoid that very possibly only I find fascinating. Inexplicably, other people were entertained by this.

General Internet Addict: Perhaps the most holistic view of my life as the Prince of Dorkness can be divined from my Twitter stream, which is riddled hourly with links that catch my interest, the best of which are reposted on this blog. (I sometimes post my own thoughts there, as well, but for the sake of decency I keep those to a minimum.) Finally, for you economic determinists who really want the inside scoop on my consumerist self -- or are looking for the perfect way to bribe me -- there's always my Amazon Wishlist.

In the unlikely event you would like to retain my services as a consultant, writer, speaker, radio guest, conference/convention panelist, or one-shot dungeon master, you can reach me at jay [at] jaygarmon [dot] net. Depending on the job, I can be be had for very free or very not. Pitch me, and we'll talk.