Looking Back on 14 Years of Running a Sci-Fi Convention 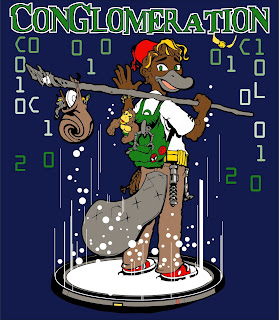 As many of you may know, I just helped shut down ConGlomeration Science Fiction Convention.

Our 20th year of operation and our final convention was set to go off Easter Weekend (April 10-12) 2020, but COVID-19 got in the way. We never got to have the final sendoff convention we wanted, and, due in part to that lack of closure, I'm going to process my thoughts on ConGlomeration and convention-running here.

I have a lot to say that will span multiple posts, so just click on #concomlife to see them all in one place.

I got involved with ConGlomeration because I used to live next door to Mark Kantlehner, who at the time was on the convention organizing committee (ConCom) for ConGlomeration. After a couple of years of pestering me to attend, I finally showed up in 2006, the con's fifth year. I was immediately -- literally as soon as I walked in the door -- drafted into helping at the registration desk handing out badges, and I never left the staff ranks again.

I was formally invited to the ConCom in 2008, briefly as co-head of programming with Marsha White, but had to beg off when I was thrust into a job change. I returned later that year as webmaster and head of technology.

More accurately, I was emergency drafted.

When ConGlomeration's co-founder Chris Howard left town and broke off contact with the ConCom, he took ownership of the ConGlomeration.org domain name and hosting contract with him. When those lapsed, the con lost its website with no means to get it back; the URL was scooped up by cyber-squatters immediately and we couldn't afford to repurchase it. Marsha snagged ConGlomeration.info and I spun up a placeholder Blogger website in a couple of days.

For the next 12 years, I was the de facto CIO of ConGlomeration.

I installed a G Suite domain (then called a Google Apps domain, and in those days it was free) to handle convention email addresses, and ran the site on Blogger (which is still up) because it was free, too. All we had to do was pay $10 a year for the domain name, which I did out of my own pocket for about five years. That's how broke the convention was.

Because the webmaster had no real duties during the actual convention, I continued to help staff the reg desk at the con. In 2008, we had our most famous guest ever -- Walter Koenig -- and I was tabbed to be his guest liaison and run his autograph table.

Counting out the cash raised at Walter's table was my first real interaction with Sean Reck, ConGlomeration's founding chairman, in a business capacity. My first year at the con, Mark had all but forcibly drug Sean out to dinner Saturday night to enjoy some Mongolian barbecue because Sean was often so overworked at the convention he forgot to eat. I was part of that meal, and joined every "chairman's dinner" from that point forward (except in 2008, when Walter bought me dinner) so Sean and I were friends. But when Sean and I started working the books in 2008, I got drawn more into the back-office operations of the convention.

In 2009, we had no convention because our host hotel went bankrupt and took our deposit with them. When we came back in 2010, I was a regular member of the ConCom meetings and was among the most outspoken contributors. In 2011, I recruited Peter David as our Author Guest of Honor.

In 2014, when Sean asked me to build a "real" website for ConGlomeration, I completely recreated the site in Wordpress by myself. When we began an email newsletter that same year, I configured, deployed, and managed our Mailchimp operation. Our first e-newsletter announced a new emphasis on hands-on fandom; a change I helped argue for as part of the ConCom.

When Sean had health problems in 2017, and wanted to establish a "line of succession" for the convention so we wouldn't get a repeat of the Chris Howard problem, Keith Bratcher resumed his past position as co-chair, and I joined in, creating a three-headed Cerberus-chairman. This led to me developing the privately infamous Star Trek Org Chart for ConGlomeration.

When Sean had to take a sabbatical from ConGlomeration in 2019, I stepped in as acting chairman, running the ConCom meetings and keeping the committee on task. (Keith was busy running Programming, our most demanding department. Jess Bratcher, our Treasurer and Hospitality Director, helped fill in the gaps in a big way.)

Suffice it to say, I've seen how a lot of the sausage is made.

And it was me who, in effect, ended ConGlomeration.

As far back as 2018, I was starting to burn out. I had proven terrible at delegating (despite Shannon Cancello's futile attempts to help me run some of the tech side of the con), and any time a new initiative or new technology was necessary, I took it upon myself to run it. When other ConCom members flaked on their tasks, it was me who tried to get them back on schedule, or who tried to compensate by doing death-march sessions on the website, newsletter, or Facebook page to advertise around their tardiness or disorganization.

Late-recruited guests, late-finalized schedules, and never-printed flyers or game-shop campaigns became my job to compensate for, mostly by posting and publishing online content at a furious rate.

Even my kids started to notice, and worry, that I was doing so much convention work.

(When people ask why ConGlomeration stopped doing a Program Book, you can tell them that was my initiative, too. "The Book" was a constant last-minute stress-bomb we continued to do a half-ass job of, and I finally got the ConCom to admit we'd be better off without it, because we were never going to do it well. Sean prided himself on being the public asshole of the convention, but behind closed doors, I was the merciless change agent asshole.)

When, despite the promises and best intentions of other committee members, I saw these patterns repeating with ConGlomeration 2020, I told the rest of the "command staff" -- Treasurer Jess, Programming Head Keith, and Chairman Sean -- that I was resigning after 2020. Sean understood, and immediately said it was time to hang it up and make 2020 our final convention. I had taken on so many duties, and so painfully failed to delegate or cultivate assistance, that the con wasn't viable without me.

I have never felt so flattered and so guilty at the same time. I'm still a little ashamed, honestly.

There were other mitigating factors, all of which I'll address in future posts, but my resignation also gave Jess and Sean permission to pull back, too. Sean had been at this for over 20 years, serving on the ConCom for RiverCon, our predecessor convention and serving as chairman of ConGlomeration for all 20 years of our event. He took a sabbatical for a reason. Jess was getting overwhelmed with the back-office functions of ConGlomeration. A lot of our other committee members were worn down, too.

I "broke the seal" on resignations and, after a command staff meeting over soup and sandwiches, we all agreed 2020 would be our last year.

While planning 2020 and dealing with all the COVID-19 uncertainty, I was also the first one to broach cancellation, rather than rescheduling, if our dates proved untenable. This suggestion was also agreed to, not least because we all knew we didn't have it in us to plan a 2021 event, especially after doing 75% of the work to create a 2020 event that wouldn't happen.

Thus, I have more than my share of blame for there being no "sendoff" convention. I said I wouldn't work on a "replacement" final convention, so that's a big reason why there will never be one. I know it was the right decision for me, but that doesn't mean I don't regret it a little.

My buddy (and ConGlomeration logistics lead) John Hickman shared a meme that helped me muster up to these choices. 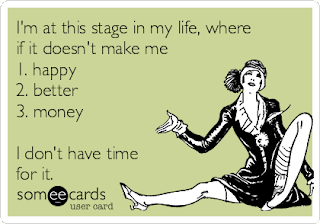 There was a time running ConGlomeration made me happy, before I burned out. There was a time it made me better, back when it was an excuse to learn new technologies and new skills, rather than just maintain processes I already built.

ConGlomeration never made anybody any money.

My wife, a therapist, shared another sentiment that sealed the deal. 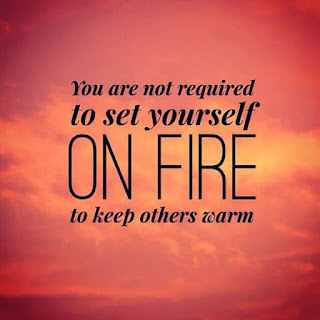 I had gotten to a place where I was running ConGlomeration because other people needed it, not because I did. And the cost was growing too great for me and my family to bear. So I stopped and, to my enduring regret, the convention was forced to stop with me.

So, that's who I am, in a ConGlomeration context, and that's the reason I'll be writing these blog posts. They'll be from my perspective (which I'm sure others on the ConCom won't fully share), and detail my opinions and analysis (which you can take with a dump truck of salt). I hope it's helpful to other people, but I'm writing it to be helpful for me.

Thanks for reading. See you in the #concomlife.
Posted by Jay Garmon

Email ThisBlogThis!Share to TwitterShare to FacebookShare to Pinterest
Labels: #concomlife