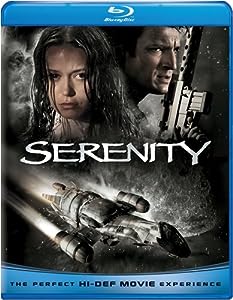 Adding to my increasingly unrealistic blogging workload, I am toying with another column called Geek Lotto Dreams, chronicling what geeky things I would do with an obscene nine-figure lottery payout. First up, I'd start a Serenity-themed restaurant.

I'd call it the Blue Sun Grill, after I'd paid Universal and Fox and Joss Whedon all the necessary royalties for this boondoggle of a saloon to do it up right.

Say what you will about the counter-factual probability of a U.S.-Chinese collaborative entity colonizing a retro-Western terraformed solar system, but an Asian-Western fusion steakhouse with Serenity's frontier-plus-high-tech design sensibility would be fun as all get out to eat at. Rustic decor, polished teak, mahogany, and butcher block tables (some with bench seating, perhaps) surrounded by metal-and-wood walls adorned with flatscreen digital "paintings" and fictional 'Verse travel posters. Digital meets frontier, east meets west, subversive meets sublime.

Pepper the traditional steaks and stir-fry menu with experimental soy-and-gelatin experiments derived from the works of Homaru Cantu or Wylie Dufresne, just like colonists had to do with their multicolored protein rations. Every meal would be served with forks and chopsticks, and just for kicks, only sliced apples would be allowed inside the doors, lest they contain grenades. (The fact that said grenades are called Grizwalds is amusing, if only for the implied association with Clark W. Griswold of National Lampoon's Vacation fame. Perhaps a Grizwald Crumble would be a hard apple-cider cocktail.)

Dishes would be named for the planets upon which they "originated," and as those planets were all given symbolic or referential names in Firefly, the dishs would all be gastronomic entendres. The fact that Heinlein was a gas giant planet in the series is a joke not lost on many, so a Heinlein souffle would be no small or simple dish.

This isn't a Planet Hollywood amusement-park parody of Serenity we're talking about, but a serious bistro with legitimately complex and inspired fare and a sublimated snarkiness to its sci-fi verve. I'd wager lots of folk would eat there, not just the out-of-the-closet Browncoats. In fact, if the vision is executed correctly, non-fans won't even know this is a theme joint; it'll just be a somewhat off fusion restaurant. And if not, I'll be imaginarily rich, so I can keep it going as a vanity concern whether it's profitable or not.