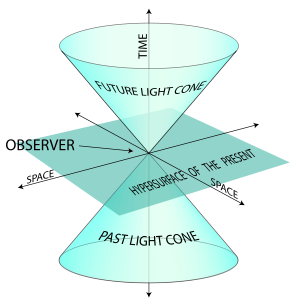 Light cone (n.) - A simplified diagram for explaining causality, brought to us from relativistic physics. The diagram on the left (blatantly stolen from Wikipedia) is a light cone based on Minkowski spacetime, which is a fancy term for a uber-simplified diagram of the universe as a flat, two-dimensional plane; no Einsteinian curving to confuse us. Time is the vertical axis, so everything below the center is the past and everything above it is the future. At the very center is an event--typically, a flash of light, which gives us the term light cone. The lower cone represents all the possible events that could have caused the flash of light to happen at the exact time and place it actually occurred. The upper cone is all the events that could be influenced by the flash of light after it happened.
As you get closer to the event in time, fewer and fewer other events could have caused it, as the particular circumstances surrounding the event get more specific. For example, if the flash of light is caused by an LED in my office, any LED that existed in the world a year ago could go on to create the flash of light, so long as in the intervening year any of those LEDs found their way to my office. As we approach the time of the event, the vast majority of those LEDs are ruled out, as they are destroyed or simply stationed too far away to reach my office in time to emit the flash, even if they move there at the fastest possible speed. Finally, only one LED is in the exact right place at the exact right time to emit the flash--the one at the center of the light cone.
At the moment of the flash, I may be the only person in my office, so for simplicty's sake, I am the only observer of the flash (though in reality the exact electrons used to generate the flash, the heat produced, the bacteria incinerated or mutated, and so on all are influenced by the flash in some fashion). I note the flash, and remember it. For every subsequent moment of my life, I could potentially mention the flash of light to someone else, thus passing on the flash's influence. Each person I mention it to could mention it to someone else, and every one they tell could mention the flash to someone else, and so on exponentially until the end of time. Thus, the flash's light cone--its potential realm of influence--expands as we move forward in time.
That said, there were innumerable objects in the past that could never have emitted the flash of light no matter how their circumstances progress, and there are incalculable persons, places, things and events in the future that can never be influenced by the flash of light, if only because all the non-causers and the un-effectables exist so distantly in the universe that they could neither reach my office at any point in the universe's past, nor could lightspeed information from my office reach them before the heat death of the universe. All of these events and objects outside the flash of light's realm of influence exist outside its light cone. Sci-fi writers occasionally invoke the light cone when discussing time-travel and its myriad consequences.
I bring it up because: Because, quoth Wikipedia, 90 years ago tomorrow (May 29, 1919), "Einstein's theory of general relativity is tested (later confirmed) by Arthur Eddington's observation of a total solar eclipse in Principe and by Andrew Crommelin in Sobral, Ceará, Brazil." Any excuse to discuss spacetime relativity and its sci-fi applications is a good one.
Further reading: Author Charles Stross makes light cones somewhat central to the plot in his Timelike Diplomacy series, Singularity Sky and Iron Sunrise. In the series, there is a godlike artificial intelligence called the Eschaton that forbids any time travel that intersects with its own light cone because it doesn't want humans erasing it from history. This leads to a great deal of political and technical intrigue when humans tried to use time travel to conduct interstellar war. Fun stuff.